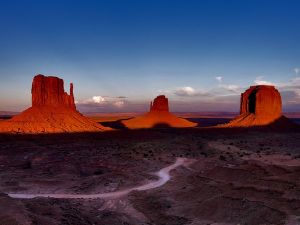 Monument Valley is what most people in the world think when you talk about the desert southwest of the United States.  Colored plateaus, tumbleweeds, and endless plains.   While the area contains several National and Tribal parks, the vast area allows for solitude.  Home to tribes of Navajo and Anasazi Tribes, the area has been inhabited and cherished as sacred land for centuries.  Once sitting at the bottom of a basin, it was the repository of erosion debris that built layer upon layer.  Now, in addition to being a national monument, it is also a sacred land for the Navajo tribe.  It is filled with holy spots and burial grounds.

Stark and beautiful, it also reminds the hermit or seeker that nature can, by its very makeup, be dangerous as well as beautiful.  Snakes, scorpions, and coyotes are only a few of the dangers present.  The environment itself can alternate between freezing cold and scorching hot within a few minutes.   Taking precautions is absolutely necessary before any kind of long term hike or camping pilgrimage.  This is doubly so during the hot summer months where the local fauna is at its height and the weather is dry.

Humans, even as creatures of tribes and communities, sometimes seek the solitude of nature.   It is places like this that our ancestors roamed in search of food and resources to feed and cloth their families.  Away from the movements of others, nature comes into focus.  You, as the seeker, become a part of it…sometimes alien…sometimes familiar… watching as birds circle and a lizard sits on a rock sunning itself.

The Retreat and myself have both been products of the American Southwestern Desert.  It was here that looking towards the horizon and wondering how the world spun became a long term quest for understanding.  Other deserts in other countries have fostered the same appreciation for the starkness and silence of the sand dunes, mountains and brush lands. 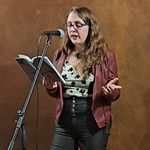 A place to appreciate a femme's love for bois...

The Sixpence at Her Feet
Young & Twenty
Damyanti Biswas

WITHIN ARE PIECES OF ME

A blog full of humorous and poignant observations.

Love Letters to the Tar Pit

A Commentary on Social Sustainability

Learning Bonsai in the Hoosier state

ALONG AN OLD FENCEROW

haiku and other experiments in verse

O at the Edges

Musings on poetry, language, perception, numbers, food, and anything else that slips through the cracks.

"A torn jacket is soon mended, but hard words bruise the heart of a child." Henry Wadsworth Longfellow

The blog of a french storyteller, a polish photography lover and a world adventurer, Christina Czubak.

The Art of Bonsai

A literary blog of poet, playwright and essayist Rachael Stanford

Some call it red
Bonsai advice

For complete works, go to www.InfiniteVisionArt.com

One Self traveling many pathways.  One Being expressing as many lives.

Line Of The Week

Contemplations expressed through the written word...

Celebrating Nature and Magic for Kids of all Ages

A water cooler for the public health crowd

Author of "Hidden Harvest" and "Tip and Trade"